We have discussed CVA at length in our newsletter and blog as it is arguably the most significant change to the accounting standards, from a financial instruments valuation perspective, since hedge accounting was introduced. The standard relating to CVA, IFRS 13, was developed as a result of the Global Financial Crisis. It became apparent that credit risk had been mispriced for a long time in the lead up to the implosion of the credit markets in 2008/2009. IFRS 13 forces organisations to include an adjustment to financial instruments to represent a credit component – both for the reporting entity as well as the counterparty. The adjustment can be a reasonably immaterial number impacted by factors such as the remaining term to maturity and how far in- or out-of-the-money the derivatives are.

Some companies argue that the relative immateriality of the credit adjustment reduces the necessity of quantifying the credit component, to the extent that some companies are not bothering to do it. We understand that view as IFRS 13 seems like another regulatory requirement that adds little value to the business. However, the standard is explicit in its language that “fair value”, by definition, includes credit, therefore, the decision to do nothing about it cannot pass muster with the auditor.

A contributing factor to the “immateriality” argument is the prevailing benign credit conditions. The credit spread of banks can be observed through the Credit Default Swaps (“CDS”) market. A CDS is like an insurance policy – it compensates the holder of the policy if the underlying entity defaults on its debt obligations. As the chart below shows the credit quality of the big 4 Australian banks has been improving since the spike in 2011 and has continued to retrace back to levels that prevailed pre GFC. The resulting effect is to reduce the credit valuation impact on out-of-the-money derivatives (current exposure method). We would argue that although credit conditions have returned to benign levels it is only a matter of time before another credit shock occurs and companies will be better prepared to quantify such impacts if they already have a tried and tested methodology in place. Our Hedgebook clients benefit from the system’s low cost, easy to use CVA module. 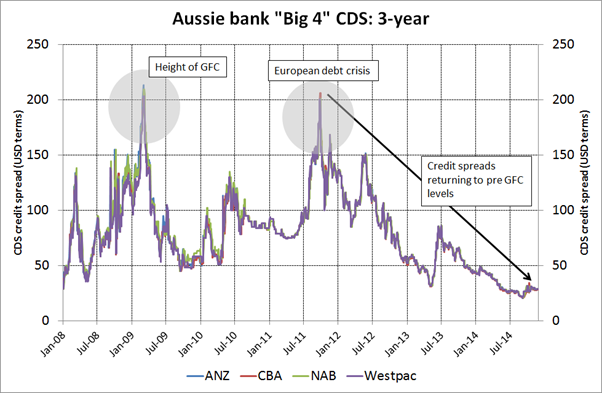