After more than a decade of declines in interest rates, leading to the historically low interest rate environment, the recent reversal has been rapid. The pent-up consumer demand following two years of off-and-on Covid induced lock downs, and fueled by cheap money, has contributed to inflation rates not seen for decades.

Of course, not all the inflation woes have been created by the demand side of the equation, the Russian war in Ukraine has led to inflation on the supply side, particularly around energy. The western world’s efforts to reduce reliance on Russian oil and gas has had a knock-on effect to food and energy prices leading to the cost-of-living crises in many parts of the world. Naturally, workers are asking employers for wage increases to compensate for the rise in prices and this in turn risks pushing inflation rates even higher.

So central banks are in catch-up mode and reaching into their (arguably limited) tool kit to try and rein in inflation. Base lending rates are increasing sharply which has the dual effect of curtailing consumer demand through less disposable income and incentivising people to keep their money in the bank. Those with debt/mortgages will feel the impact of higher interest rates as mortgages roll off their fixed rate period and reset at the higher market rate. Borrowers on floating rates will feel the effects more immediately. Savers are rewarded with higher interest rates which means less consumer led demand and, therefore, a reduced contribution to upward pressure on prices.

One role of the financial markets is to form a view on the outlook for interest rates over coming months and years and determine the shape of the yield curve (interest rates over various time horizons). The charts below show the substantial change in interest rate markets over the last 12 months from historically low levels for GBP, NZD and AUD. 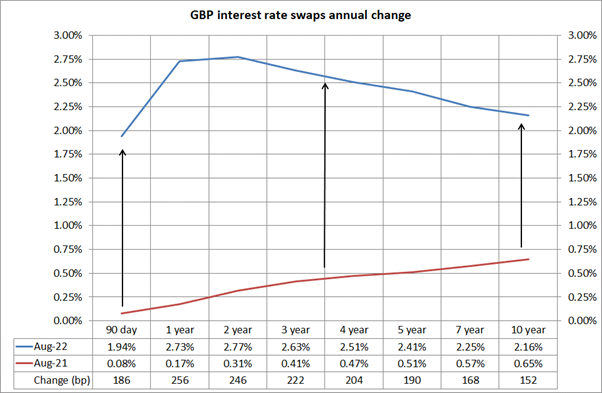 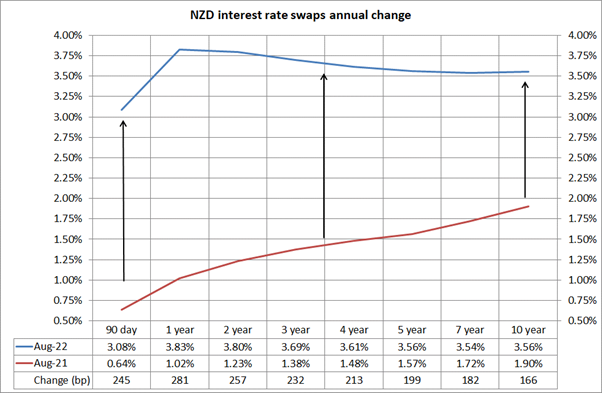 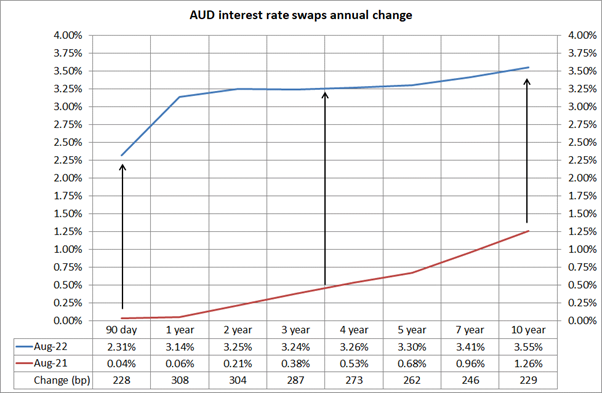 The valuation at 4 Aug 2021 was +£25k (net of the present values of the pay fixed and receive floating cashflows): 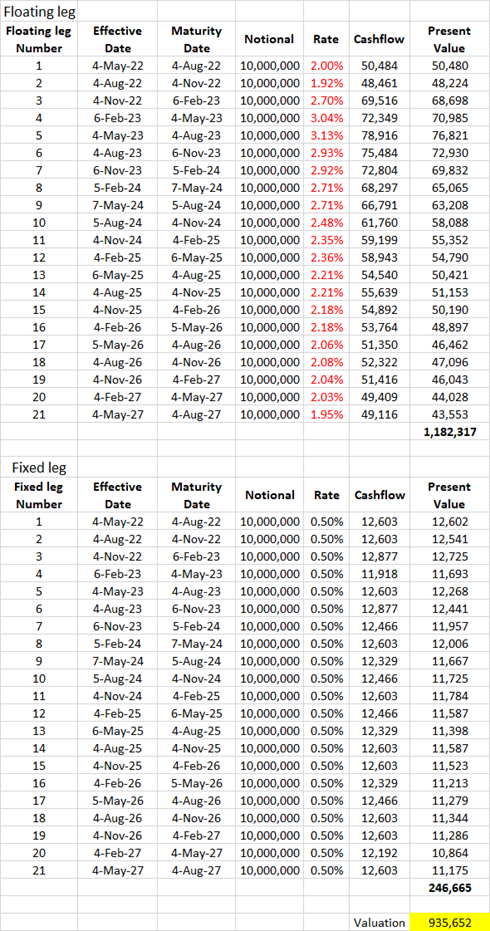 The change in valuation is a function of the receiving floating leg of the swap now being between 2% and 3% for the remaining term of the swap in contrast to 12 months ago when floating rates were not expected to move beyond 0.75%.

We have noted an uptick in our clients’ valuing their interest rate swap portfolios as they track these changes more frequently given the changing interest rate environment.

Interest rate swaps are often long dated instruments with maturities out to 10 years and beyond, so many swaps entered a few years ago have looked quite sick in recent years with large negative valuations. The rapid rise in interest rates, to combat the inflation pressures, has led to the reduction in these negative valuations.

It is also worth noting that as these financial instruments become less of a liability and, indeed, an asset, then there are consequences for CVA/DVA calculations (but don’t worry Hedgebook can help).  The question now for treasury teams is where to from here? As always for those managing interest rate risk there is a balancing act between interest cost certainty and interest cost.

If you’d like to learn more about Interest Rate Swaps – why not download a copy of our latest eBook – a guide to IRS for ‘smart’ people.