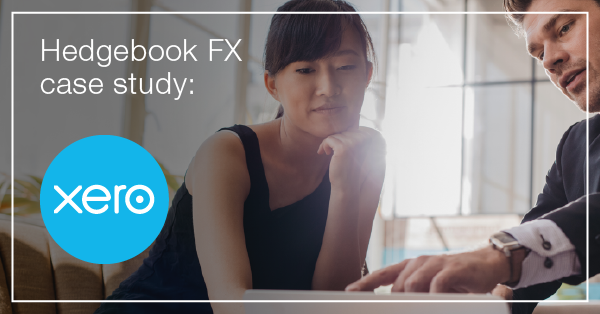 Xero is a phenomenal success story. From its beginnings in 2006, Xero has grown to a $407 million revenue, ASX listed, global company with offices in New Zealand, Australia, UK, US, Canada, Asia and South Africa. The Xero platform is available in over 180 different countries and its app marketplace has over 700 add-ons that have been built by third party vendors.

Xero’s growth beyond its New Zealand borders was not without challenges. Rapid growth in overseas revenue and costs gave rise to significant foreign exchange risks. Reducing volatility in NZD cashflows, Xero’s base currency, became an area of focus for the finance team. Tom Robertson, Senior Treasury Analyst, recalls, “We needed a cost-effective tool which would give us efficiencies and control when managing our FX exposures. Hedgebook jumped out as an attractive solution. Hedgebook was a quick win from our perspective and a big step forward. It enabled us to embed deal capture, confirmation, strategy and reporting within a single tool.”

The increased complexity and quantum of Xero’s foreign exchange exposures required the treasury function to become more sophisticated. Hedging was traditionally transacted in its most basic form — forward exchange contracts — but Xero’s treasury team were keen to explore alternative hedging instruments. Tom continues, “When considering the use of FX options as one of our hedging tools, a key decision was being able to use those sophisticated products with more control. Hedgebook gives us independent valuations and clear visibility of our overall hedging position.